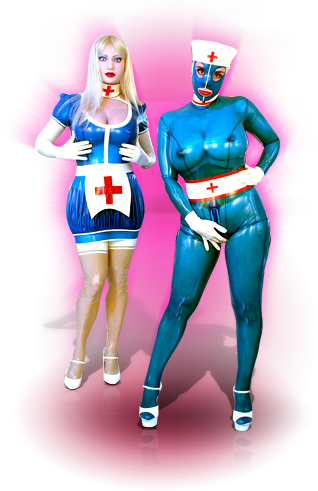 How does a man transform into a sexy girl or even a living rubber doll? The Rubber Sisters Monica and Jacline make it possible! About ten years ago, they developed a special, ingenious way to transform a man very believe worthy into a woman. After many requests from fans and interested people, they decided to offer their self-developed products. Since February 2009 the online shop, 2nd-skin.com with special transformation products made from latex and silicone exists. The extremely realistic skin tone of the silicone enables a very authentic transformation, whereby latex also satisfies the material-fetish. A complete transformation-set consists of mask, suit, hip padding, corset and breasts. With that, almost everybody can be turned into a sexy female. The very realistic female face-mask “Gloria” is made to measure, and has a subtle, base make-up, which can be enhanced and changed by the customer with regular make-up. The whole-bodysuits are shaped through silicone paddings or the inflatable latex-figure pants. The perfect female waist comes from a specially developed, very flat ‘underneath-corset’ (with or without laces). The pre-formed breasts in the suit will be optionally filled with a breast prosthetics bra or breasts glued onto the human skin. That way, everyone can put together a combination according to their own personal desires. With this realistic and authentic female transformation, you can move around naturally looking in everyday life as a woman. Their own passion motivates the Rubber Sisters to constantly develop new products that will make this transformation even more perfect. In their “Rubber Sisters College”, they pass on their knowledge, offer help and the possibility to live out phantasies, as well as they show their own photos and video stories. You can meet the Rubber Sisters personally at their one stand on international events and fetish-expositions. Get actual infos through theirs newsletters.

In Contessa Antonella's life everything revolves around luxury and rubber. Naturally, the dolls she collects are in rubber as well. however, this collection of dolls is unique because they consist of dolls zhat are alive – living toys for everyday life. She owns prostitute-dolls to finance her luxury, servant-dolls to serve her around the glock and of course the most important for the Contessa, love-dolls to fulfill her insatiable sexual appetite. Starring: Mistress Sandra, Mona, the Rubbersisters Jacline and Monica

The Rubber Sisters must be among the most bizarre to be found on the worldwide fetish scene. With incredible (German) perfection, innovtion and consequence, this power couple has driven the idea of the male-to-female transformation to the maximum. Starring: Monica, Jacline, Lady G, Valentina und Shinyaline.

FETISH WORLDS is a new series of DVD edited by Marquis, containing selected clips from the beste fetish studios worldwide. Each DVD opens up a whole new fetish world. With incredible (“German”) perfection, innovation and consequence, the Rubbersisters has driven the idea of the male-to-female transformation to the maximum. In part 2, “lifestyle” they are topping themselves once more!

Rubbersisters Cats, a coproduction with Freaks Inside